Switzer, the first woman to run the Boston marathon 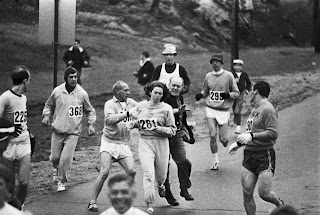 I have to say I love journalistic photography from the '60's and '70's. *(story below)
*(I just got this picture from a facebook friend about the first woman to run the Boston Marathon and what she had to face, discrimination. She had trained and followed all the protocol to enter the race, and I'm sure at the time realized what she was doing was trail-blazing, but how great it would be? maybe not. Then, the unthinkable happened... she was attacked by race organizer Jock Semple who was shouting, “Get the hell out of my race and give me those numbers.” However, Switzer’s boyfriend and other male runners provided a protective shield during the entire marathon.)


What do you see when you look at the picture? a woman running a marathon? No small feat for anyone at any time but this particular time it was 1967 in the centre of a powerful movement to open up social perceptions. But, what I see are the men in the picture. Oh I see her too, she's shrouded in the light of a higher calling and determination. But it's the men that stand out for me because I too run a race and I'm ever convinced that it's those that champion us and support us that make the impossible possible.  This is where the story, in my mind, gets exciting; do any of us ever know what our true calling or gift is? Do we know, ever, absolutely that when we wake up that day and do the thing we've trained for that we will leave an indelible mark on history? some butterfly is flapping away in Bora Bora right now and the air is moving just enough to set off a series of events that you are a part of. Are you training for something? or, Are you training alongside someone who needs what you can offer in support?


There is a quiet rumbling ever under us that is spearheaded through the arts. Queen Victoria proclaimed "I would venture to warn against too great intimacy with artists as it is very seductive and a little dangerous". Maybe that old monarch was right..... stay away............. you're still here. Ok well, since you asked. If you choose to be around us ask how you can be a champion, a shield from the attackers, the users, the egomaniacs. Ask what we need to keep making our work.
Posted by thepear at 1:23 PM

my favorite things in no particular order

buy an iphone case or skin

Promote Your Page Too